A Non Governmental Organization, Global Amnesty Watch (GAW) has described as false the Amnesty International report which described various human rights abuses by Nigerian security operatives, saying the report is part of a global conspiracy to undermine the Nigerian state.

Addressing a world press conference in Abuja, President of GAW, a Human Rights Law researcher at the Middlesex University London, Philip Agbese said the AI report is not only wrong but that the  Nigerian Military should be commended for doing their best to halt threats to citizens as exemplified by Boko Haram and other insurgency groups.

He said had the military allowed itself to be blackmailed into inaction as Amnesty International intended, Boko Haram would have overrun the country by now while IPOB separatists with other criminal elements would have mutated into groups worse than Boko Haram.

According to him, the Amnesty International does not expect the military to fold it’s arms while armed groups over run the country and kill innocent Nigerians.

He urged Nigerians to discard the report and rally round the military in its avowed quest to keep the nation safe from both internal and external aggressors.

He said, “the organization has failed to recognize the current threats the nation and its citizenry face under Boko Haram’s campaign of terror and horror and its threat to the collective existence of man in this part of the world.

He said “it is unfortunate that rather than face the reality and point out the state actors that are exporting suffering across the world, AI is pursuing a sick obsession of defending killer groups like the Indigenous People of Biafra (IPOB), Movement for the Actualization of a Sovereign State of Biafra (MASSOB), and even accused the Military of being harsh in its operations against Boko Haram even when it admitted that the terror group was committing crimes against humanity.

“These groups have at various times carried out unwarranted attacks on peace-loving Nigerians  and even members of the Nigerian military, the Nigerian Police Force and other law enforcement agencies have not been spared as they randomly and regularly get killed in the course of trying to stop attacks on Nigerians.”

Agbese faulted the sources which AI relied on for its report. 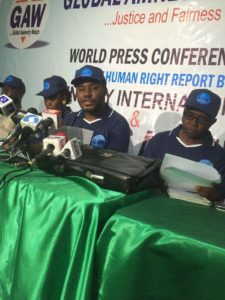 He said the GAW will soon carry out it’s own investigation and make public it’s report, adding that since it’s formation about a year GAW has carried out similar researches in different countries with a view to exposing the truth.

He said whereas AI relies on two newspapers to write its report on countries across the world, Global Amnesty Watch, will ensure that it does not only visit scenes of incidents but will go further to consider actions with existing legislature and in conformity with the Universal Convention on Human Rights.

He wonder why amnesty international always target African and other third world countries, saying the organization should go to  a country like the United States with record gun violence, police extra-judicial executions and state backed execution of records levels to peddle its ware.