Skip to content
You are here
Home > NEWS > NCPC Boss, Uja Calls On Israel To Partner With Africa On Development

The Executive Secretary of the Nigerian Christian Pilgrim Commission (NCPC) Rev. Tor Uja has called on the Israeli government to partner with Africa on development.

Uja, who made this know in his office in Abuja while playing host to the Chief Executive Officer institute for Christian leadership Development, Pretoria, South Africa, thanked the institute for the efforts not just to represent Christ but to build healthy relationship with Israel.

Uja further affirmed that in today’s world, Africa is the surest partner anyone can have. According to him, “working with Africa will make Israel strong”.

He stated that the entire Christian community takes its root from the Abrahamic covenant thus he called on the Israeli government to particularly involve Nigeria and NCPC in its development plans.

He stressed the need to work towards the sustainability of Africa. According to him, “we will like this movement to be an enduring movement with lasting structure” he commended his guests for putting together the on going African leadership summit in Abuja.

He equally commended the Israeli Ambassador to Nigeria for working towards having an environmental Summit with Nigeria in Israel. He canvassed that such Summit on Agriculture should also be held to boost the sector. His words: “we would like the government of Israel to hold such Summit either in Nigeria or Israel”. 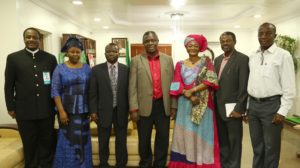 He informed the NCPC boss that his Institute has been convening Africa leaders to come and see how the desert In Israel had blossom into a fertile land. He described Israel as a country where cutting edge technology has become a model for the world. He described this as the fruit of Abrahamic blessings.

Mr. Olanipekun further called on African leaders to connect to Israel and be part of the blessings and transformations of the small, but mighty country for the development of Africa nations and cities.

He also hinted that every two years the institute often organizes conferences in Israel to discuss developmental plans. According to him: “we are pleased that NCPC has helped our delegates who participated in our conferences to learn from Israel. His words: “it is really a honour to meet you and to thank you for the good work your office is doing”.

He solicited for partnership with NCPC and to create a desk for the African leadership forum in NCPC. He equally invited the NCPC boss to be part of the delegation for the next conference.

He disclosed that the African Leadership Development was working towards establishing Africa Israel Chamber of Commerce to boost economic relations between Israel and African nations.