The Executive Secretary of the Nigeria Christian Pilgrim Commission, Rev. Tor Uja has called on the Nigerian Media to diminish the reporting of Boko Haram activities and kidnapping and focus on the strength of the nation.

His words: ‘’ the Nigerian media should focus on what makes us and not what unmakes us”. He further commended the Nigerian Military for playing such a critical role in our history as a nation.

Rev. Uja further emphasized that it would be important for the military to support our democracy to give it strength. He added that all forces that fight against our democracy should be condemned.

He stressed that communication and information flow is very critical during warfare’ thus he commended the Nigerian Armed Forces for their vision and initiative to set up the Armed Forces Radio station. 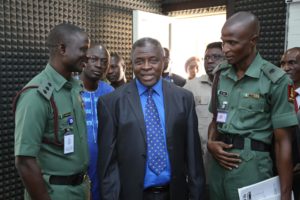 The NCPC boss further affirmed that the military has taken its values from the Bible so he enjoined the Armed Forces Radio to report properly and give values to the public. Consequently, he admonished the military to impact its values using its radio station.

He commended the Radio station for the effective coverage of Christian pilgrimage in Nigeria.

The Executive Secretary also informed his host that the Commission has entered into a strategic working relationship with the National Hajj Commission of Nigeria (NAHCON). According to him; “we are convinced that if NCPC work closely with NAHCON, many of the issues in the society will be reduced”.

He urged all Nigerians to believe more in Nigeria than they believe in their regional and tribal leanings. In the words of the NCPC boss; “I want you to give more attention to programmes that will project this country”. He added; “I am hoping that this Radio station will give Nigeria its primacy”.

In his remark, the Station Manager of Armed Forces Radio, Abuja, Major Sani Uba promised to give support to NCPC. He explained that the mandate of NCPC and NAHCON are sensitive and as such would do everything possible to support NCPC in the area of information management.

His words, “we are going to use our authentic medium to report the activities of NCPC”, he also promised to use their medium – Armed Forces Radio to teach values of Christian programmes and pilgrimage activities.

The Station Manager further canvassed for support for content materials from NCPC to develop a Christian pilgrimage programme on their platform.

He called on the NCPC boss to advise the Christian clergy to always preach peace in their various churches. 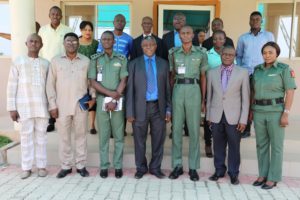